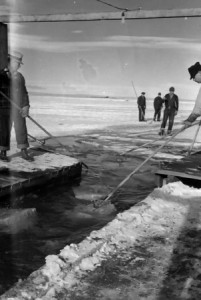 Ice plants, such as this one in Laramie,  were essential to keeping produce fresh as it traveled from farms to its destination.

A PFE icing plant was located near the railroad tracks north of Laramie. At one time, it was the largest natural ice housing facility in the world.

It was purchased by a Fort Sanders soldier named Knadler in the 1860s. The Union Pacific Railroad bought him out and built a bigger plant, which burned down and was replaced with a much larger ice plant uptown. A huge ice house was built over the years for the ease of handling the ice and moving it on and off trains. It was abandoned in the early 1960s and burned to the ground in 2009.

Learn more about the history of the Ice House.