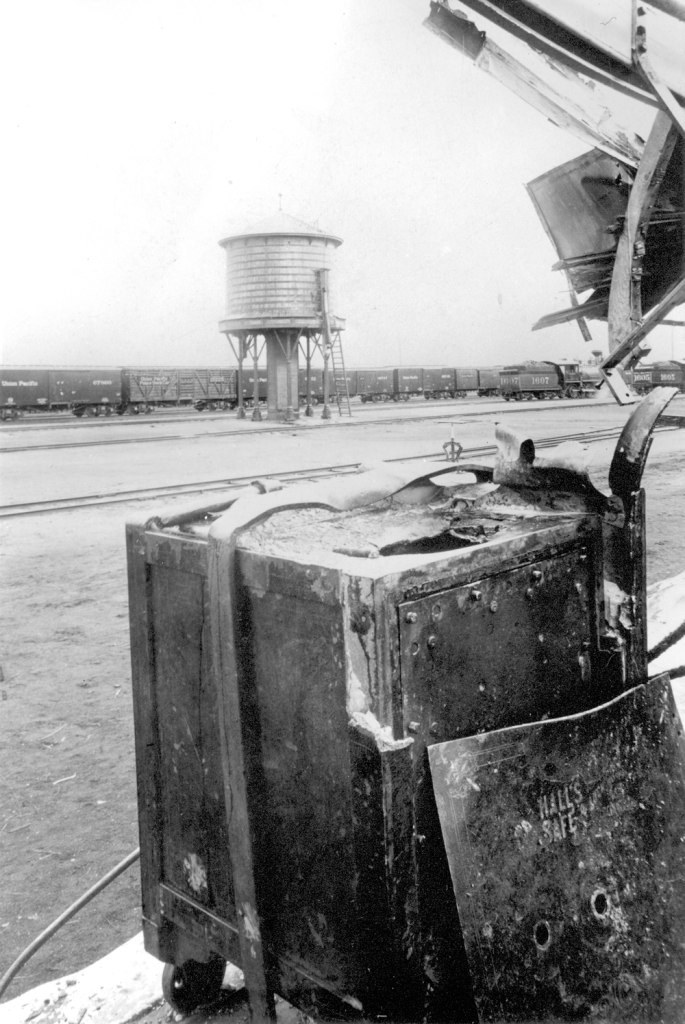 Train robbers –possibly Butch Cassidy and his “Wild Bunch” –boarded an Overland Flyer train near Wilcox, Wyoming, blew up this safe and escaped with thousands of dollars!

The Wilcox train robbery occurred at 1:00 a.m. on June 2, 1899, near Wilcox, Wyoming, outside of Laramie. Masked men boarded the Overland Flyer, forced it to a halt and ordered the attendant to open the door. When he refused, the car and safe were blown up; the thieves escaped with $30,000.

The Sun-Leader reported that suspects were the Wild Bunch, led by Butch Cassidy. On the other hand, the Wyoming Derrick reported that the culprits were George Curry and the Roberts brothers. Whomever they were, the authorities believed some of the robbers were heading for Hole in the Wall country in Central Wyoming. There, in a gunfight, Sheriff Joe Hazen was shot and killed, and the robbers escaped across the river.

Another train robbery occurred on August 29, 1900, when robbers seized $50,000 in gold from a Union Pacific train near Tipton, Wyoming. While the robberies were successful, they marked the beginning of the end for the “Wild Bunch.” In 1897, E.H. Harriman took over the railroad and its reconstruction. The special agents he hired, along with the modern communication of long distance telephone service that allowed the agents to trace gang member movements, proved to be the undoing of the gang.

Learn more about the Wilcox robbery and the undoing of the “Wild Bunch.”