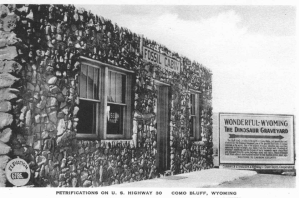 The building known as “the world’s oldest cabin” is a structure made of fossilized dinosaur bones just east of Medicine Bow, Wyoming.

Thomas Boylan, an owner of a local service stop, assembled the cabin in the early 1930s from bones he had collected while working for various sheep operations in Wyoming some years earlier. His original plan was to piece together a complete dinosaur, but his plans were dashed when a University of Wyoming dinosaur specialist informed him that he did not have a complete specimen.

Boylan’s son helped him build the cabin just in time for tourist season. In 1938, it was dubbed the “World’s Oldest Cabin” by Ripley’s Believe It or Not.